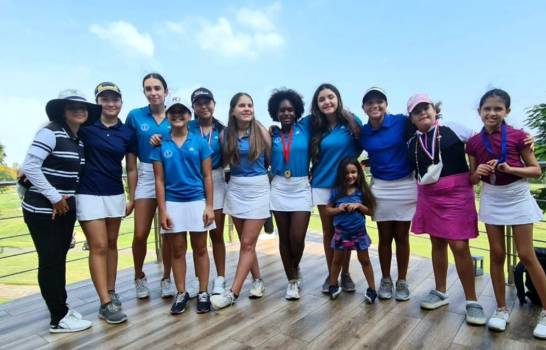 The youth participants in the second stop of the Youth Tour. (Press/Fedogolf)

Rodrigo Huerta, winner of the stop with his mother, Raquel Quesada. (Press/Fedogolf)

The young Rodrigo Huerta continues unstoppable and won with the best score, the second stop of the National Junior Tour, organized by the Youth Committee of the Dominican Golf Federation.

In the event, which was played on the golf course of the Santo Domingo Country Club, 63 players took part in a festive atmosphere, with the presence of many parents and relatives of the young golfers.

In the same category, but the women’s division, in a beautiful duel, Maria Fernanda Fernandez beat her teammate Isabella Medero by two strokes, 88-90.

In the 15-18 category, Camila Yoo beat Stefania Mosyagina 78-83. While Eduardo Bonetti, in the men’s category, won against Kevin Rodriguez 73-75.

Waldo Aguasvivas Arias with a score of 79 won the 11-12, Marcos Betances came in second place with 83. In the women’s category, Rafaella Quinones took first place followed by Ana Paula Fernandez.

In the 7-8 category, we had Matias Then in the first place and Miguel Gneco in second place, with excellent performance.

Is there a right to mandate vaccinations during a pandemic?

In an entertaining match, Diego Columna won the 4-6, followed by his partner Jose Maria Elias.

Maria Del Mar Aybar led the 4-6, with Anabel Marcano in second place, among the ladies.

In the framework of the second stop, the Youth Committee, players, and parents made a graceful recognition to Juan Delgado for his excellent contributions and support to Dominican junior golf. Delgado, who received a plaque of honor, was accompanied by his wife and daughters.

The champions and runners-up of the last two seasons of the Junior Tour were also awarded.

The third stop of the Junior Tour will be held at the Playa Dorada Golf Club, Puerto Plata, on Sunday, November 14.