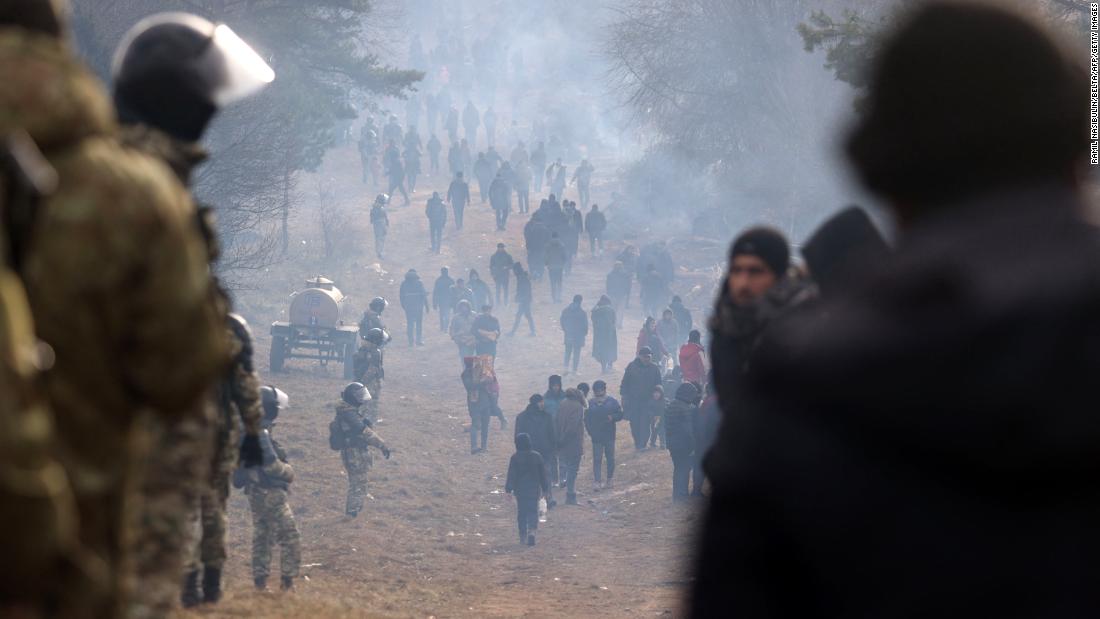 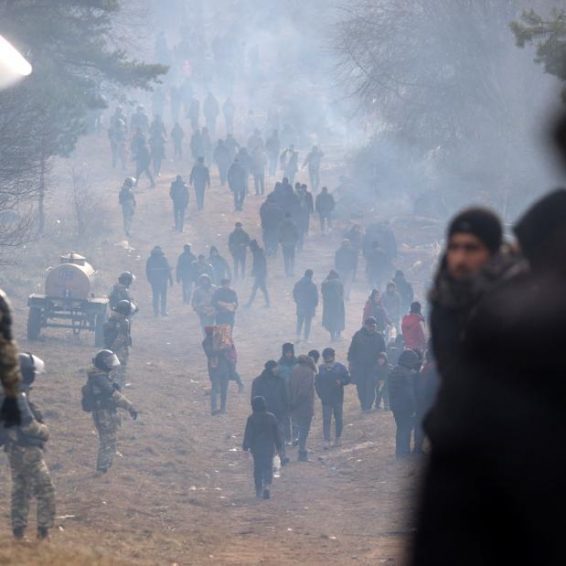 Desperate scenes of hunger and hypothermia unfold at Belarus-Poland border

3 weeks ago·5 min read
ShareTweetPinShare
Home
World News
Desperate scenes of hunger and hypothermia unfold at Belarus-Poland border
The content originally appeared on: CNN
The migrants — most of whom are from the Middle East and Asia, and who are hoping to travel on from Poland deeper into Europe — have been gathering on the Belarusian side of the border, where they are enduring bitter weather and a lack of food and medical attention.
Tensions are rising on the Poland-Belarus border. Here’s what you need to know
Western leaders have accused Belarus of manufacturing a migrant crisis on the EU’s eastern frontier as retribution for sanctions over human rights abuses. President Alexander Lukashenko’s government has repeatedly denied such claims, instead blaming the West for the crossings and accusing it of poor treatment of migrants.
Russia, Belarus’ largest political and economic partner, continues to defend Minsk’s handling of the border crisis while also denying any involvement in it.
“I want to tell you something else. I want everyone to know. We have absolutely nothing to do with it. Everyone is trying to impose responsibility on us for any reason and for no reason at all,” Putin said in an interview aired Saturday by state broadcaster Russia 24.
Read More
“Our aviation companies are not transporting these people. None of our companies are.”
‘We drank from puddles’: Migrants describe brutal journey through forests on Belarus-Poland border
Putin added that Lukashenko also claimed not to have any sort of involvement through Belarus’ national airline, Belavia.
“By the way, Belavia, as Alexander Grigorievich [Lukashenko] told me, is not transporting them either. They book charters, it’s a visa-free entry — people buy tickets and fly in. Yes, there are certain groups engaged in transporting these people to European countries, but they have been operating for a long time,” Putin said.
Belarus Foreign Minister Vladimir Makei said Friday that the Belarusian side was doing everything possible to reduce the flow of migrants.
Meanwhile, Poland has deployed 15,000 soldiers to the border to prevent illegal crossings, the Polish defense minister said Wednesday. Some 4,500 people have tried to cross the border since the start of this month, according to the Polish Border Guard.
The Polish Border Guard on Saturday accused Belarusian authorities of equipping migrants with tear gas.
“A group of about 100 migrants waited for the possibility of illegal border crossing. Belarusians equipped foreigners with tear gas, which was used towards the Polish services. This and subsequent attempts to illegally cross [the border] were prevented,” the border guard said via Twitter. No photos or video were given to provide evidence for the allegations.
The border guard also repeated its claim that Belarusian authorities were using lasers and strobe lights against Polish security services at the border, and accused Belarusian soldiers of damaging a border fence near the Polish town of Czeremcha.
Each side has accused the other of spreading misinformation as the crisis has unfolded.

Meanwhile, thousands of people remain stuck between Poland and Belarus in conditions the United Nations has called “catastrophic.” Desperate scenes of hunger and hypothermia are playing out in forests and at makeshift camps at the border as the geopolitical dispute intensifies.
Russia and Belarus hold military drills as migrant crisis on EU border grows
Belarusian State Border Committee officials told CNN on Friday the migrant camp near the Bruzgi-Kuznica border crossing with Poland was expected to double in size within a week if the refugee crisis remains unresolved.
About 2,000 people are currently waiting in the border region but hundreds continue to show up daily, officials told CNN, and Belarusian state border officials estimate that figure will increase to 5,000 within a week.
The body of a young Syrian man was found Friday in the woods near the Poland-Belarus border close to Wolka Terechowska, about 80 miles to the south of Kuznica, according to a tweet from the Polish police.
“The activities carried out in the place where the body was found did not allow for an unequivocal determination of the cause of death,” the police said.
Polish Interior Minister Mariusz Kaminski on Saturday called the growing crisis an “attack” on the European Union, of which Poland is a member state.
“We are dealing with an attack on the entire European Union using an artificially created migration crisis. It is about creating an East European migration route. Everyone knows that — both in Europe and in the USA,” he posted on Twitter.
Kaminski added that he’d spoken to his German counterpart, Horst Seehofer, who Kaminski said had offered his support on the construction of a border wall.
US President Joe Biden told reporters Friday night that the situation at the Belarus-Poland border was of “great concern.”
“We’ve communicated our concern to Russia. We’ve communicated our concern to Belarus. We think it’s a problem,” Biden said.

Russia demonstrated its support for Minsk by flying two long-range Russian Tupolev Tu-22M3 supersonic long-range bombers over Belarusian airspace on Wednesday and on Thursday.
Neighboring Ukraine is also scaling up security. On Thursday, it announced it would hold military drills with some 8,500 servicemen and 15 helicopters in an area near its borders with Poland and Belarus to counter a potential migrant crisis.
Britain’s army chief warns risk of accidental war with Russia is greater than during Cold War
The show of force unfolding across the region is continuing to test a fragile political order, with allegations from the United States on Russia’s military buildup deepening concerns over the potential for a wider geopolitical crisis.
US Secretary of State Antony Blinken said Wednesday that the US was “concerned by reports of unusual Russian military activity” and mentioned the possibility that Russia may be “attempting to rehash” its 2014 invasion of Ukraine.
Kremlin spokesman Dmitry Peskov hit back at the allegations on Friday, saying that they represented an “empty, groundless escalation of tensions.”
In turn, Putin criticized “unscheduled” NATO drills in the Black Sea in the Russia 24 interview aired Saturday.
“It seems that they are simply keeping us on our toes. Well, they should know that we are on our toes,” Putin said.
“The United States and its NATO allies are now conducting unscheduled — I want to emphasize — unscheduled exercises in the Black Sea. Not only a fairly powerful naval group has been formed, but aviation is also used in the course of these exercises, including strategic aviation,” Putin said. “This is a serious challenge for us.”