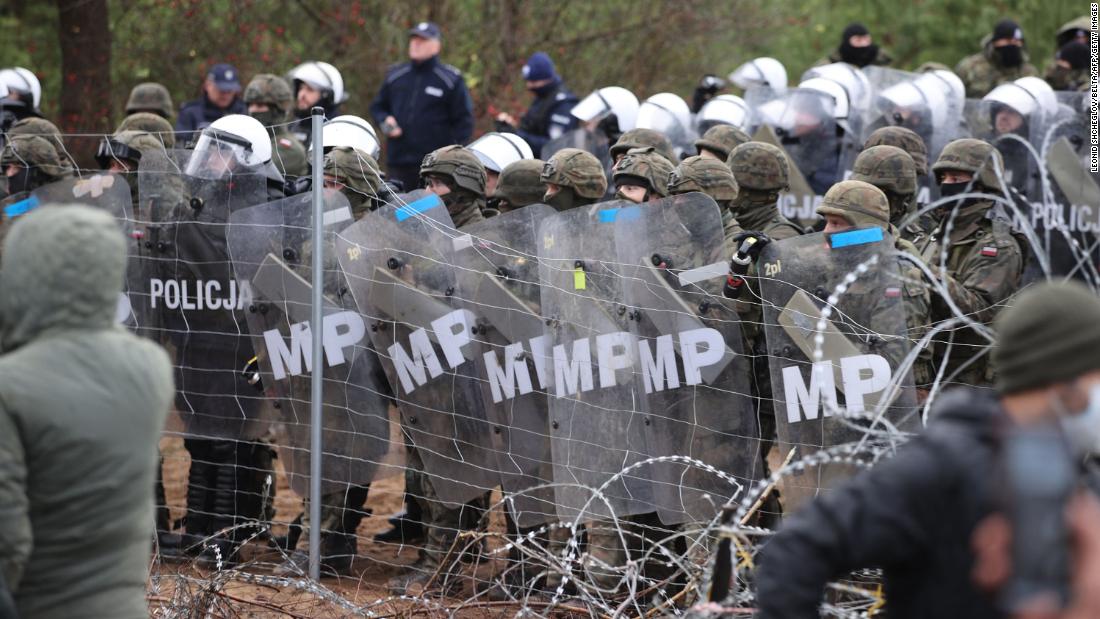 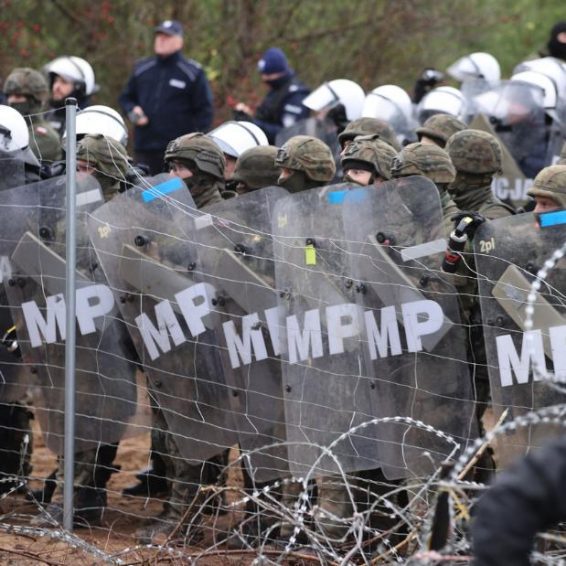 4 weeks ago·5 min read
ShareTweetPinShare
Home
World News
Crisis worsens on Poland-Belarus border
The content originally appeared on: CNN
In the latest in a weeks-long migration crisis at the border, the head of the Polish border guard said that groups of people were attempting to breach the border on Monday evening.
“The situation at the border is difficult. More numerous groups of migrants are led to the border. Attempts are being made to force the border through,” Ewelina Szczepanska said, adding that she was confident that Polish forces could handle the situation.
Poland’s defense ministry said earlier on Monday on Twitter that “a group of migrants is currently located close to Kuznica.” The post was accompanied by aerial footage showing large crowds congregating on the Belarusian side of the border. The ministry added later that: “Currently, migrants have set up a camp in the Kuznica region. They are constantly guarded by the Belarusian services.”
The spokesman for the general headquarters of the Polish Border Guard, Michal Tokarczyk, told CNN: “Belarusian services are moving large groups of migrants towards the Polish border. We are waiting for their further move and we are prepared for any scenario.”
Read More
In a follow-up statement, Tokarczyk specified that there are currently around 4,500 border guards and about 9,500 Polish Army soldiers stationed at the border as “a group of several thousand migrants is heading towards the Polish border.”
German police stop far-right vigilantes attempting to patrol Polish border
The Belarus State Border Committee, which is responsible for the country’s external borders, said the migrants near the border want to enter Poland as refugees and do not pose a security threat.
A growing number of people have been illegally crossing Poland’s border from Belarus in recent weeks. According to Tokarczyk, since August more than 30,000 migrants have attempted to enter the country.
Belarusian leader Alexander Lukashenko has previously been accused of manufacturing a migrant crisis on the border by the Prime Ministers of neighbors Poland, Latvia and Lithuania, leading Poland to adopt a bill in October for the construction of a wall along its border with Belarus.
European officials have also accused Belarus of encouraging people to cross illegally into Poland, and its other European Union neighbors, as part of efforts to put pressure on the bloc over sweeping sanctions it imposed on Minsk in June. The sanctions by the EU, the US and Britain were a coordinated response to the Lukashenko government’s forced landing of a Ryanair flight and arrest of an opposition journalist on board, as well as “continuing repression” in the former Soviet state.

In another tweet Monday, Poland’s Defense Minister, Mariusz Blaszczak, said thousands of soldiers were “prepared to defend the Polish border.”
“More than 12,000 people are on duty at the border … We raised the state of alert,” Blaszczak wrote.
Meanwhile, the Polish Territorial Defense Forces also said in a tweet that it was raising the alert level to support the border guard, adding: “Soldiers! Check your gear and communication equipment, let your employers and families know.”
Belarus floods the European Union with migrants, taking a page out of Putin’s playbook
The Polish Ministry of Interior and Administration said earlier on Twitter that migrants on the Belarus side had so far been stopped on Monday and that the situation in Kuznica is under control.
It posted video showing Polish police and other armed personnel standing near a barbed wire fence, with the migrants on the Belarus side. Meanwhile, an urgent government crisis meeting was convened amid the growing tensions, according to the interior ministry.
Polish Prime Minister Mateusz Morawiecki wrote on Facebook: “The border of the Republic of Poland is not just a line of a map. It is sacred — the blood of Poles was spilt over generations to protect it!”
Lithuania — which shares a border with both Poland and Belarus — said it was redeploying troops as tensions continue to escalate, according to the Lithuanian State Border Guard Service and reported by LRT, the Lithuanian public broadcaster.
“We are preparing for all possible scenarios,” the public broadcaster quoted Rustamas Liubajevas, the head of Lithuania’s border guard, as saying.
Exiled Belarusian opposition leader Sviatlana Tsikhanouskaya urged a strong response from the EU and United Nations.
“Belarus’ regime escalates the border crisis — migrants are pushed to EU border by armed men,” she tweeted. “The migrant smuggling, violence & ill-treatment must stop.”

Belarusian President Lukashenko’s government has repeatedly denied manufacturing a migrant crisis, blaming the West for the crossings and treatment of migrants. CNN has reached out to the Belarusian government for comment.
Kremlin spokesman Dmitry Peskov on Monday defended Minsk’s handling of the migrant issue, saying Belarus was taking all necessary measures to act legally.
The Belarus State Border Committee also said in a Facebook statement: “Foreigners who are near the border with Poland declare their intention to enter the territory of a neighboring country and exercise their right to apply for refugee status in the EU. All of these people, including women and children, do not pose a security threat and do not behave aggressively.”
The Belarus State Border Committee added it did not rule out provocation from the Polish side. “Taking into account the statements of Polish officials about the concentration of armed forces and equipment near the border, we do not exclude provocative actions by the Polish side aimed at justifying the use of physical force and special means against refugees.”
In a later statement the Committee added: “The situation on the Belarusian-Polish border remains extremely tense. More than 2,000 refugees, including a significant number of women and children, are in front of the Polish barriers along the border … Refugees repeatedly tried to inform the Polish side that they had left their countries because their lives were in danger.”
It then accused Polish security forces of deploying tear gas on the migrants and using “aviation to exert psychological pressure,” which led to some of them attacking the Polish barriers.
Charities say migrants face grueling conditions trying to cross the border from Belarus in freezing weather with a lack of food and medical attention.
Polish authorities said seven migrants have been found dead on Poland’s side of the border, with reports of more deaths in Belarus.
Humanitarian groups also accuse Poland’s ruling nationalists of violating the international right to asylum by pushing migrants back into Belarus instead of accepting their applications for protection. Poland says its actions are legal.